Hey. this is the quotes section. "Do be do be do" Time spent with patients is more important than the treatment given

Argo And Ocean Heat Content The earth is closest to the sun in January, so the earth gains energy around that time, and loses it in the other half of the year. please QUOTE THE EXACT WORDS YOU DISAGREE WITH.

Time for me to get on a hobby horse and get knocked off.

I understand what you are trying to say but disagree with the concept.
The energy in equals the energy out on a 24 hour basis.
Hence when the earth is closer to the sun in January yes there is more energy in but also more energy out to balance.
The atmosphere is naturally hotter as the sun is closer.
But the earth does not retain more energy stored in the sea. Any heat that has gone deep is balanced by colder water elsewhere as the earth has to give up all the energy it takes in over the 24 hour cycle.
If that heat went deep somewhere else had to radiate the equivalent back to space.
Yes there are Kelvin waves, yes, there are pockets of down-welling hot water.
But these do not store extra heat, they only carry heat that has already been balanced by the outgoing radiation from the rest of the sea and land.
That is why “the net TOA imbalance generally only varies by something on the order of ± half a watt per square metre over the thirteen years of the record, with no statistically significant trend at all”
not astounding at all.
TOA is simply the heat in, heat out interface.
Hence so called stored heat cannot come back to bite us. It has already gone back to space.

Yes El Nino is real, the sea is warmer but there is no more heat in the system because of it.

There must be more heat in the system causing El Nino.

The simplest explanation for this would be altered albedo due to cloud cover. This lets more heat into the atmosphere which then heats up.
More complex would be altered albedo due to atmospheric factors we have not taken into account.
Choppy surface water in storms, dust storms, forest fires.
or even factors in the sea which might cause increased reflectance off water.
The last would be simple variance in the amount of energy emitted by the sun which we are reluctant to consider.

angech, It is interesting how the deep ocean temperature varies. For there to be a reasonable steady state with the atmosphere, sea surface temperature has to vary with respect to the whole atmosphere not just the portion of the atmosphere above the actual ocean surface. The oceans have to “make up” for the land heat capacity short comings. So if you consider the ratio of ocean to the total surface area, the change in the 0-700 meter temperature looks a little bit different than the OHC for the tropical and sub-tropical regions. 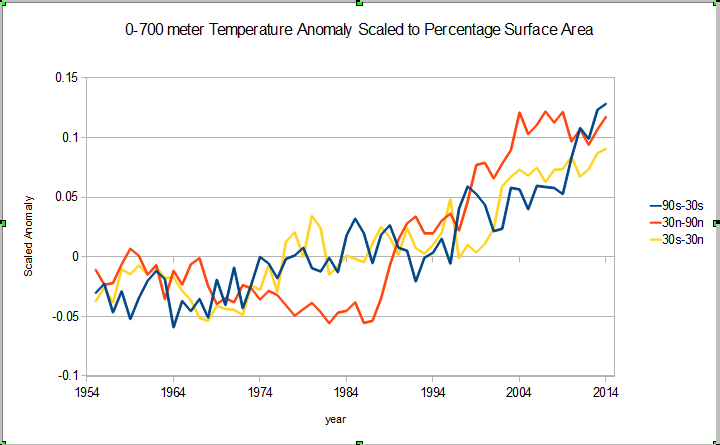 There the temperature anomaly is scaled to the ratio of ocean surface to total surface area for the three regions.

The northern subtropics take about 10 to 20 years to catch up with changes in the rest of the oceans. There isn’t really enough 0-2000 meter data IMO , but that would take longer to “catch up”. Anyway, looking at just SST or just OHC changes without considering the surface ratios doesn’t paint a complete picture.

The heat transfer from the earths core is minuscule compared to the heat output from the sun which is what warms our atmosphere.
If the sun were to go cold the earth would continue to lose its own intrinsic heat at its own intrinsic rate.
The amount of heat the earth itself emits would gradually diminish over time according to most scientists who assume that the core of the earth is cooling.
You are mixing up total energy, sun plus very small earth with energy flow,very small earth out with imagination, cold sun plus very small earth out. There is a larger differential in surface temp of the cooler earth to the temperature inside the earth but the flow of endogenous energy (very small) from the earth core to the surface remains the same and will diminish in time as the earth’ score cools.

Sorry Steve.
Willis stuff is incidental to a concept I am trying to sort out.
Forget Willis.
I was trying to understand how if the energy in equals the energy out on a daily basis, which should be the case, how everyone is missing the fact that we are not really warming or cooling on a daily basis as a planet.
Yes we have hot and cold surface temperatures over a year but in reality, if the sun input does not change and the volcano’s stay average then the energy input equal output and the warm years are purely due to the atmosphere having more heat while other parts have less heat.
So air heat content] plus sea heat content plus land heat content plus ice heat content equals x, if the air heat content is higher then some of the other 3 must be lower.
Instead of looking for missing heat in the oceans we should be looking for missing cold.
CO2 and GHG help keep the air heat content at a a certain level responsive to the solar energy passing through.
The message is that no extra energy cannot be stored in the sea as energy in must equal energy out.
Your contention that CO2 is a prime driver of the air heat content is true. My contention is that we have not allowed for what amount of energy is getting through for the GHG effect to take place.
If albedo increases or the sun puts in less energy at times then the CO2 effect cannot be the cause of a rise in sea surface temps/air heat content. when the amount of energy it has to react to is less.
*solar energy varies with elliptical orbit [proviso].
I think this concept that we are dealing with a chimera of climate change when the scientific reality is counter intuitive deserves a much bigger discussion.